Today, Americans face an increasingly complex challenge in planning successfully for retirement. To help address the myriad of issues at hand, many individuals and families are turning to annuities, insurance products that can be essential in accumulation, income and legacy planning.
>> Learn More

Updated mortality tables released by the Society of Actuaries (SOA) tell a continued tale of increasing longevity. Given current statistics, it’s important to know that an annuity is the only product that provides you with an income guaranteed to last your lifetime, no matter how long that is.
>> Learn More

As the facts about annuities continue to be disseminated, a growing number of organizations and individuals are recognizing the product’s benefits. From Congress and the U.S. Treasury to the chief actuary of the Social Security Administration, proponents of annuities are speaking out.
>> Learn More 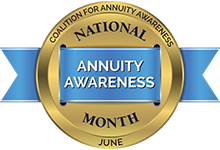 The retirement landscape in the United States is ever-changing. Individuals are living longer, working longer and needing income longer. Currently, more than 10,000 baby boomers on average are turning 65 each day and tasked with identifying how to plan financially for their golden years. Beyond this generation, younger adults are looking for ways to protect their assets while enjoying some of the market’s upside potential.

All of these reasons and more signify the prominent need for increased awareness and understanding of annuities. That’s why the Coalition for Annuity Awareness has declared June as National Annuity Awareness Month.

Since the Coalition began its outreach to the states in 2015, it has received signed proclamations from 20 states declaring June as Annuity Awareness Month. Each year, we continue our efforts to increase this number, working toward a proclamation in every state. Moving forward, the Coalition will work to underscore the importance of these state actions by seeking a Resolution in the House and/or Senate declaring National Annuity Awareness Month.

These powerful products aren’t what they used to be; rather, annuities are becoming a staple in retirement plans for young and old alike. Show your support for National Annuity Awareness Month by completing the form below to receive news and updates throughout the coming months. Or, write your state governor or members of Congress to encourage their support!

As an elected official, learn more about what you can do to ensure annuities and their benefits are available to your constituents.

Access compliance-ready materials and information you can use to help educate clients on their retirement planning options.

Take control of your financial future by discovering the truth about annuity products, features and benefits in our resource library.

Members of the Coalition for Annuity Awareness